Dedicated to the bright memory of my daughter Anastasia

Taking as a fact [1] the presence of the ether in the Universe, united quasi-isotropic, quasi-incondensible and elastic medium, being the main basic matter, the carrier of the whole energy, all processes, occurring in the Universe, and taking for the base of beliefs about it working model [2-5], presenting it in the manner of twocomponent medium - corpuscular and phase, we will consider some questions of mechanical potential of the ether and resulting from decision of these questions new methods, allowing increase the possibility to see up to limits of actual, present Universe, not a past Universe, the possibility to overcome the space quicker than light.

The Structure of Ether

According to developing working model of the ether [2-5], it is the medium, consisting of corpuscules - amers. The Amer is a practically incondensible, elastic spherical particle, which can have two values of velocity: zero and local velocity of light. Amer has radius, found by present author in [2], equal

Still amers, coupled in pseudo-solid or in pseudo-liquid body, present by itself a unit of corpuscular ether - domain. Amers, moving at the speed of light, are borders of domains, named by us earlier as phase ether. As it is stated earlier [2], the ether inheres under the action of very large potential, equal square of velocity of light. In usual conditions of ether temperature, domain has 2.7·1063 amers, and its size commensurable with the size of electron. The borders of domains are exceedingly fine, since the part of phase ether is very small even in a dense substance. Contents of the phase ether in substance equals [4]

In real situation the wall of domain can not be thickenned and it is "mono-amereal", that is to say its thickness is one amer only up to density of substance

Thence very important conclusion follows: amers move along borders of domain under action of shear forces, that is to say with a shift velocity of the ether, which is defined in [3] by ether shear modulus G and dynamic density of the ether ρ

Naturally this velocity is a velocity of light, which is typical for all observed forms of moving of the phase ether - free amers.

Onward motion in the ether is presented by the phase ether. This motion has two main opposite and compensating each other flows of amers, solving eternal problem of sources - discharges in three-dimensional space:

At that situation the density of interdomain walls defines local gravitational potential, but difference of their density defines gradient of gravity field. That is naturally results from classical principle of balance. However all of that is only "superstructure" on corpuscular ether, providing mechanism of sources - discharges in the ether, the foam on the surface of corpuscular ether ocean.

Two-component ether is in the state of all-round compression. That is a main reason of acting power in him. We will give it quantitative estimation.

Thereof it is possible to draw a conclusion that amers are even so compressed. Consequently bulk modulus K for them is not equal infinity. We Try to find it. At first we will find, how much is amer compression. We will do it on indirect sign, as follows, on difference of inter-domain pressure and ether Young modulus Eo, found by present author earlier in [2].

Inter-domain pressure will find similarly as in (3)

Thence factor of compression is

In spite of the fact that velocities of phase ether and moving of domain borders are limited in velocity of light - shear velocity of waves in the ether, the longitudinal (sonic) velocity must exist in corpuscular ether, which is defined by Pierre Laplace's following formula

We note that value of Poisson's ratio of corpuscular ether differs from 0.5 so little, that it is comfortable to display in amount

On the other hand, integral on time stillness of intradomain amers on the whole visibility is very high. The multiple experiments on measurement of corpuscular velocity of light [St. Marinov, M.D.Torr - P.Kolen and others], measurements of Doppler-effect of Cosmic Microwave Background (ether black-body radiation) [14, 15] have shown, that independently from motion of celestial bodies, macroscopic (statistical) velocity of intradomain amers is a zero both in terrestrial, and intergalactical scales. Solar system moves comparatively this component of the ether at the speed of 390 ±30 [km/s].

It is naturally to assign the question: is it possible to observe the longitudinal waves in the ether, which correspond to the sonic waves in usual substances?

For that, it is necessary to define its characteristics. Naturally, the phonons in crystalline materials are the most close analogue of these waves [16,17]. Considering characteristics of phonons, it is possible to notice that they have such discriminating feature, as absence of particle - "kern", as photon has. So phonons can scatter, be formed and disintegrate easier, than photons. They can be refracted and reflected when turning in mediums, having different from usual wave resistance (impedance). Changing the density of phonons brings the change of thermodynamic condition of electrons, that is to say change of the electric resistance of material. Pulse an phonons is sent to torsion balance (pendulum).

Probably, the first person, who has found ethereal phonons is a genious russian astronomer N. A. Kozyrev [18]. He placed the resistor in focus of telescope, shielded from rays of stars, and got the signal from stars in its present position, computable it beforehand on vector of its velocities. The Results of these experiments there were very unstable, since mirror of telescope practically does not reflect the gravitational waves. So author of current article is offerred advanced variant of telescope for observation of starry sky in gravitational waves - ethereal phonons (see Fig. 2). 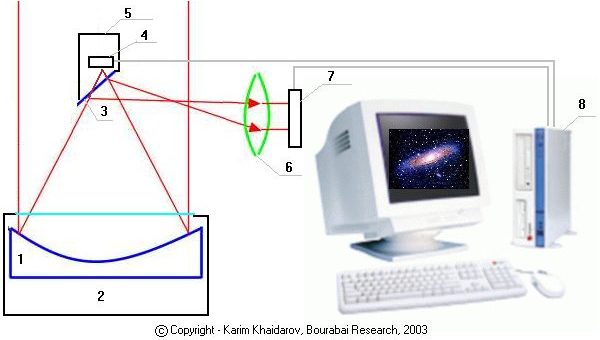 The essence of improvement is concluded in using the mirror, cooled up to condition of superconductivity. The last has the wave resistance, sharply differrent from empty ether (the vacuum) and materials in it that brings to reflection of gravitational and transverse ethereal phonons. Besides for reception of normal two-dimensional image the resistive matrix, giving the image of actual Universe (the stars in present position) is aplying. The Matrix is placed into shield, protecting it from influence of light and other electromagnetic hindrances. As a matter of convenience adjusting and undertaking the differential analysis optical - gravitational scene in telescope can be an usual optical tract.

The first experimental reception of ethereal phonons was made by genious russian experimentor Eugene Podkletnov [19]. That its known experiment of bombing superconducting dartboards by high-energy electrons (see Fig. 3)

Fig. 3. Podkletnov's experiment and its explanation

At runaway of electrons in potential electric field it gains kinetic energy, proportional its inert mass, which increases to account of velocity up to value

where me is mass of electron at rest,
V is a velecity of electron,
ñ - transversal (shear) velocity in the ether.

For deduction of electron's mass at rest, this mass defines kinetic energy of electron, being kept in de Broglie's wave

At achievement of superconducting dartboards, having sharply different from empty ether wave resistance, electron, unlike its de Broglie's wave, gets into thick of dartboard, sharply losing velocity. The de Broglie's wave can not get into superconductor and is reflected from it, being the ethereal phonon.

The addition to Podkletnov's experiment is shown on Fig. 2. There is a system of phonon speed measurement, proposed by author of present article. It consists of two sensors 3, installing apart on route of phonon moving and having symmetrical connection on length to oscilloscope 4. These sensors can be both high-frequency piezoelectric microphone, or simply resistant sensors. At placement of sensors on distance 30 metres we must get on screen of oscilloscope a picture, like shown on picture. On mark zero we must see the reaction of sensors on longitudinal phonons, having velocity on much orders exceeding of velocity of light, on mark 10 nanoseconds probably we will see the response from three-dementional phonons, but on mark 100 nanoseconds - response from transverse phonons, spreading at the speed of light.

Podkletnov's Jet is the Basic Cosmic Engine of the Future

Described experimental installation even though it does not generate longitudinal, but only transverse phonons, is an unique prototype of cosmic engines of the future. Its specific pulse, which limits puts only of energy capacity of on-board power station, exceeds known cosmic motor installation on much orders [20]. The Factor of transformation of energy in reactive pulse is limited only by toughness of superconductive screen, reflecting phonons. At voltage of runaway 5 MV on 10 times exceeding energy of electron mass at rest, factor of transformation of electric energy in kinetic energy of motion will be nearly 90%.

THe insolvency of relativistic looks at nature of Cosmos was experimentally proved by present author in [1] . Developped working model of the ether and gravitational interactions within ether [2] have allowed to throw light upon nature of matter [3] and explains unexplained before phenomena of gravitational variations [4]. Prepaired theoretical base has allowed to develop in work [5] working model of the ether up to possibility of using the thermodynamics in ether theory.

The revising of gravitational potential essence in present work has brought the author to classical notion of mechanical power and has allowed to define the velocity of fast gravitational interaction. Proposed expansion a working model of the ether has allowed to explain Kozyrev's and Podkletnov's experiments, offer the direction of development of new actual astronomy and confirm the direction of Space motor building, opened by Eugene Podkletnov.