Dedicated to the bright memory of my daughter Anastasia

. On the basis of analysis of Western terrestrial tectonosphere dynamics the mechanics of Mesozoic catastrophe, as outcome of destruction of a large comet in Earth's gravitational field and collision of its parts with planetary surface are shown.

"...His truth shall be thy shield and buckler."

This paper is written according to advice of Russian platetologist Eugene Dmitriev to give to a critic of a hypothesis of falling of a meteorite (asteroid) into Gulf of Mexico on the boundary of Mesozoic and Cenozoic, and also in connection with the questions, which have arisen for the readers after publication of the previous paper [1].

Really, during last years the hypothesis about falling a meteorite or asteroid into Gulf of Mexico at the end of Mesozoic is discussed intensive in scientific and near-scientific spheres. At the bottom of Gulf of Mexico the 280 kms diameter crater is found out also.

However let's show that young comet only, but not asteroid, could cause this catastrophe.

Tectonic map of Western Hemisphere and modern motions of plates 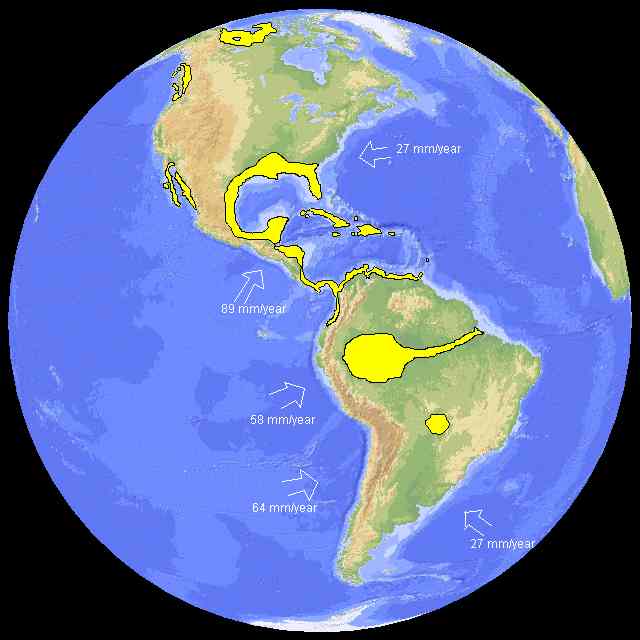 Using the field of velocities of tectonic motions the past positions of continents and oceanic plates, archipelagoes and islands of Western Hemisphere were recovered. In figures 2 - 8 the recovered physical maps of Western Hemisphere are shown. Time step dividing adjacent maps is 10 million years. It is possible to increase each picture by clicking on it. The level of ocean shown on maps corresponds to interglacial epochs similar to a modern.

Having removed rocks of Cenozoic tectogenesis shown on fig. 1, it is possible to get the physical map of Western Hemisphere of the end of Mesozoic, 70 million years ago, when these rocks were not yet (see fig. 9).

About 67±2 million years ago a puzzle of peninsulas and islands of Cenozoic tectogenesis form clear pictures astroblems - six large craters, some of which (for example, in Gulf of Mexico) have a central circus (see fig. 8).

The recovery of Western and Eastern Hemispheres appearance [1] allows to find main properties of process of collisions of the celestial bodies with the Earth. Thus the following facts were clarified:

The first and third facts practically eliminate falling of the set originally separate celestial bodies together or in different time, as orbit is strictly single.

The second fact eliminates a meteoritic (irony-stone) parentage of a celestial body, as the irony-stone meteoritic bodies are solid and do not disintegrate on orbit because of a small difference of forces of gravitation on a diameter of the body.

The fourth fact indicates that the initial body was not an asteroid, as the asteroids have no orbits too distinguished from a plane of an ecliptic.

The fifth fact results epochal simultaneity of origin all astroblems, since there were not global catastrophes inwardly Mesozoic and inwardly Cenozoic.

Thus, the character of distribution of craters uniquely indicates the cometary nature of a celestial body. Moreover, this comet was very young, because its orbit had a large angle with an ecliptic.

In a fig. 10 the animation of process of falling of this comet and continents motions during all Cenozoic is shown. Naturally, the time scale of orbital motion of the comet and motion of continents are differ on many orders.

As a result of the research the conclusion about disastrous parentage of transition of Mesozoic era to Cenozoic was confirmed.

All of that has occurred during 2,5 terrestrial hours of fall the originally single comet. For the Power of Heaven it was necessary about 150 minutes to be through with the era of dinosaurs...

The offered method of "retrograde dynamic modeling” with usage of knowledge about character of catastrophes, tectonic structure of terrestrial crust and its motions can be applied for more steep and detail recovery of the geological and biological past of the Earth.

The application of an offered method displays that the islands and archipelagoes of global ocean are outcome of Space catastrophes of the past. The motion always young (younger than 400 million years) oceanic crust moors all islands to continents in due course.

Only discovering of Cenozoic catastrophe and recovery of appearance of our planet during 70 My removes more than half of islands.

The inquisitive minds can prolong searches of tracks of Space catastrophes of the past and can recovery of more ancient maps of the Earth. For that purpose the laborious activity of the contributors the set of places, tracks of catastrophes, similar considered in the present paper were detected. Please look, for example, the magnificent book [3].

The author expresses the gratitude to Eugene Dmitriev, veteran of The Khrunichev Centre, for inspiration on writing the present paper, to Professor Vladimir Atsukowski for profound discussion and support of author's opinion about negligible probability of fall of ensemble of independent comets in one and ditto time, and also to the readers who ask questions on the paper [1].